Historically, Sintra has been a retreat for the rich. Just a short trip south of Lisbon, the small mountain town situated in cooling valleys and woods, was an obvious choice to reatreat from the sweltering heat of the city. It’s gorgeous. Long before that, around the 8th century, it also was an important strategic military site, of which the *Castle of the Moors* ruins still tell impressive tales. 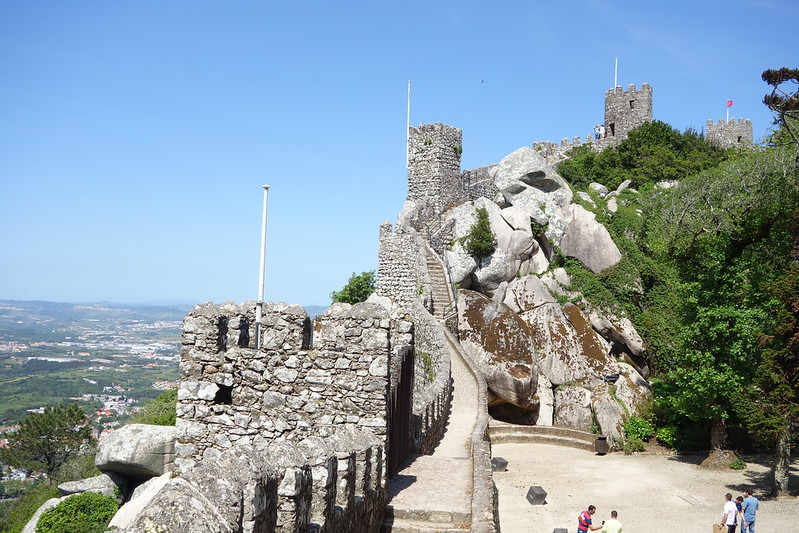 _Sintra: Castle of the Moors_

Its main claim to fame—for me personally, that is—is that this made it also the architectural playground for a delightfully deranged billionaire if you will. There are plenty of Romantic architectural master pieces there, which is why the whole place is a UNESCO World Heritage Site ([Sintra’s article on Wikipedia has the details](https://en.wikipedia.org/wiki/Sintra)).

One of these estates is just too good to be true, though. Quinta da Regaleira has it all ([Wikipedia](https://en.wikipedia.org/wiki/Quinta_da_Regaleira)):

> The property consists of a romantic palace and chapel, and a luxurious park that features lakes, grottoes, wells, benches, fountains, and a vast array of exquisite constructions. The palace is also known as “The Palace of Monteiro the Millionaire”, which is based on the nickname of its best known former owner, António Augusto Carvalho Monteiro.

Wells, benches, fountains? Right. That only tells you the individual building blocks, though. It’s the way it’s all tied together that makes it well and truly hilarious (again, straight from Wikipedia):

> Monteiro was eager to build a bewildering place where he could collect symbols that reflected his interests and ideologies. With the assistance of the Italian architect Luigi Manini, he recreated the 4-hectare estate. In addition to other new features, he added enigmatic buildings that allegedly held symbols related to alchemy, Masonry, the Knights Templar, and the Rosicrucians. The architecture Manini designed evoked Roman, Gothic, Renaissance, and Manueline styles. The construction of the current estate commenced in 1904 and much of it was completed by 1910. 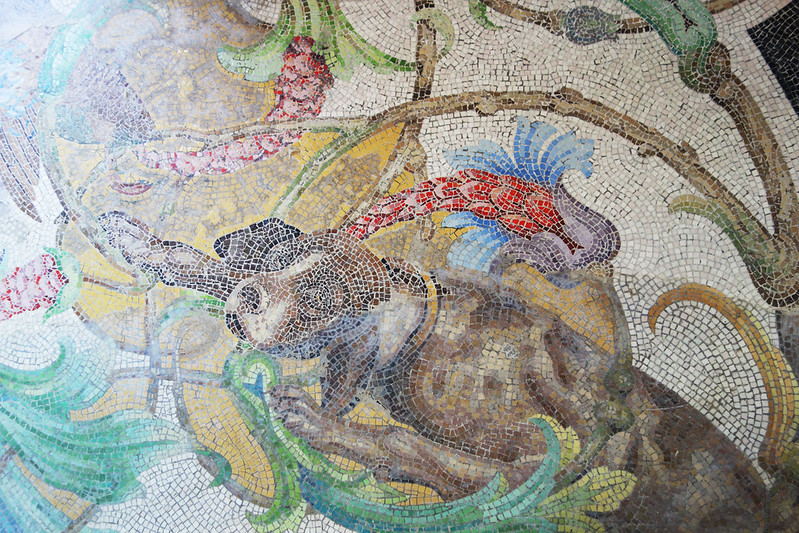 There are two things here. First of all, this whole thing looks and feels like a giant prank, or maybe just some sort of outdoor man cave-slash-insider joke. Second, this was in 1904! This isn’t that long ago. I grew up in a house built in 1903, and at that time it was well and truly not unsual to build houses that didn’t have hidden tunnels for rites of passage and the like. That’s right, the whole park is built to reflect—or allow for, or initiate—a rite of passage:

> The Initiation Wells (AKA initiatic wells or inverted towers) are two wells on the property that better resemble underground towers lined with stairs. These wells never served as water sources. Instead, they were used for ceremonial purposes that included Tarot initiation rites. The tunnels described above connect these wells to one another, in addition to various caves and other monuments located around the park. 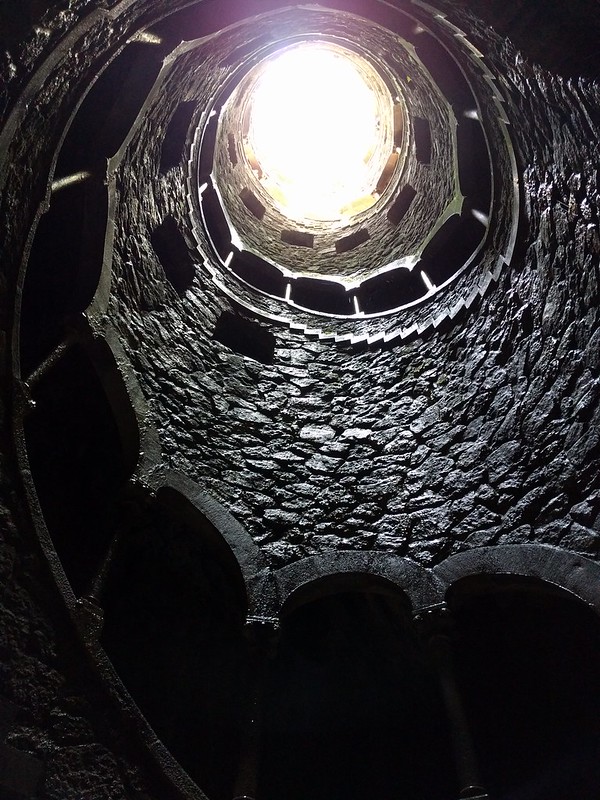 So the place is jam-packed with pentagrams, hidden tunnels, underground features, Knights Templar and Masonry references, gargoyles, you name it. It’s a kind of giant exercise in mysticism, but at a time when I would have expected that kind of thing to be long gone. 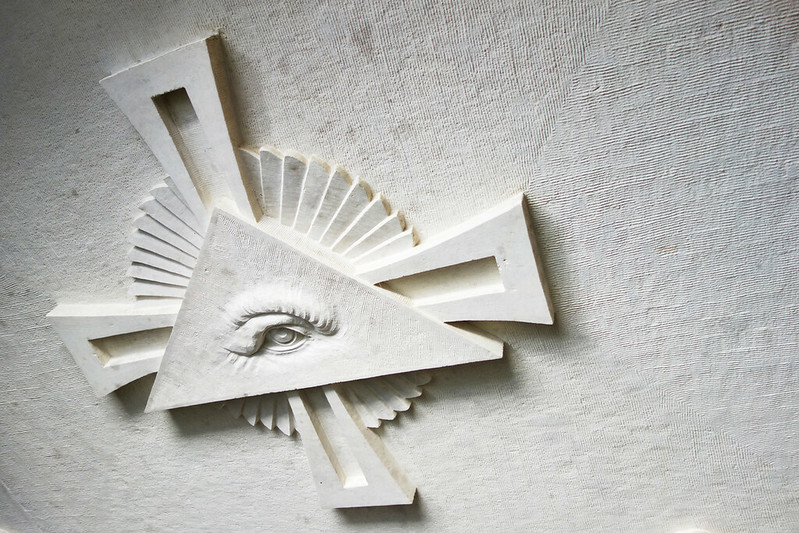 It’s so much fun to poke around there. In one of the caves I saw a dead end, fired up my phone’s flashlight and found a geo cache—of course, it’s the perfect kind of place for geo caching. 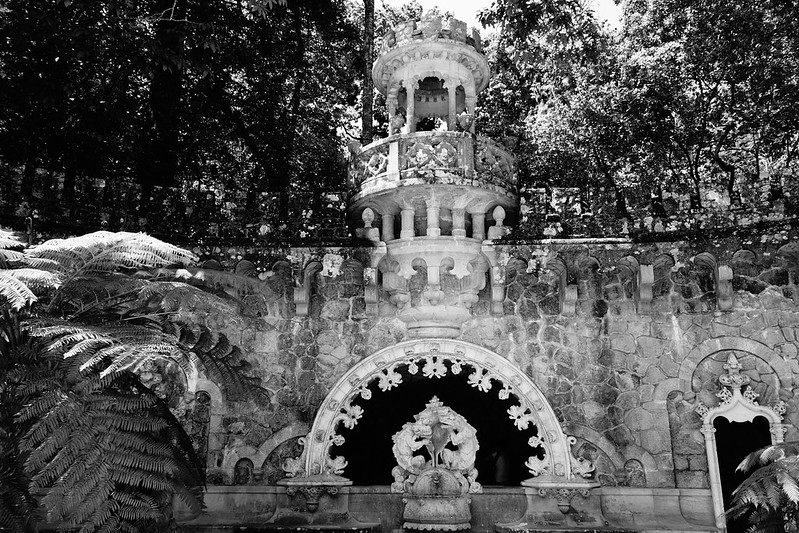 _Sintra: Quinta de Regaleira. This is where the initiate emerges._